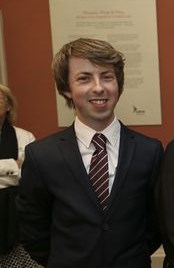 Myles Campbell B.A., M.Phil, Ph.D. holds a doctorate on Tudor-Revival architecture in Ireland from Trinity College Dublin (2014), where he served for several years on the teaching staff of the Department of History of Art and Architecture (2011–2015). His academic awards include the Trinity College Dublin Crookshank-Glin Prize and a doctoral research bursary from the Paul Mellon Centre for Studies in British Art. He has published and lectured on various aspects of Irish architectural history and was a contributor to volumes two and three of the Royal Irish Academy’s Art and Architecture of Ireland series (2014). His most recent work was as joint curator of an exhibition to mark the bicentenary of the Chapel Royal at Dublin Castle, and as joint editor of the book The Chapel Royal Dublin Castle: An Architectural History (2015). He works for the Office of Public Works at Dublin Castle.