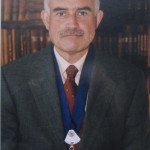 Conleth Manning MA FSA worked as an archaeologist with the National Monuments Service until his retirement in 2017. He has a particular interest in medieval archaeology and architecture and has directed excavations at many sites around the country including Clonmacnoise, the Rock of Cashel and Dublin Castle. His publications include monographs on the excavation of castles at Roscrea, Glanworth and Clogh Oughter as well as many journal articles. He is a past president of the Royal Society of Antiquaries of Ireland and of the County Kildare Archaeological Society.