Members may recall that a couple of years ago our collection of ‘curios’ was augmented when we discovered some eighteenth-century slate wine labels that had apparently lain undetected in our wine cellar since shortly after the house was built.

Our collection received another addition in May, in equally unlikely circumstances. Following a feature about the RSAI and its Du Noyer collection on the BBC 4 documentary ‘Great Irish Journeys with Martha Kearney’ we received a package in the post from an English gentleman. He had been watching the documentary and decided that we were an interesting place, and suitable repository for some items from his collection. The package which he sent included a Victorian scrapbook and a small piece of wood.

The piece of wood, wrapped in a plastic Asda bag, caused some puzzlement at first, until examined by one of our library volunteers, Sophie Hogan, who is an art history graduate. She realised that one side was painted, and staring out from the gloom of the grimy front of the panel was a pair of eyes.

The panel originally appears to have formed part of a triptych, with two hinged leaves, now lost, used to protect the image of Christ (or possibly a saint) within, but also, when opened to act as a support for this small, free-standing icon. The painting is on a gesso base and has been coated with a wax. All of the techniques, and the materials (so far as one can tell without proper scientific analysis), appear to fit with a medieval date.

On contacting the donor, he informed us that he had purchased the piece in an antique shop in Spain, and recent correspondence with a medieval art historian based in Girona has confirmed that the most likely origin for the piece is in the Taüll area of Catalonia. Once we have consolidated and gently cleaned the piece, we hope to put it on display in Society House.

Here is a photo of the icon, as we received it: 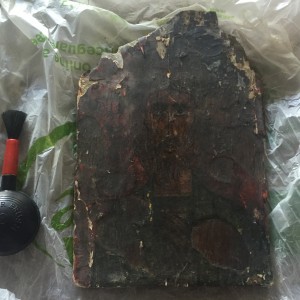