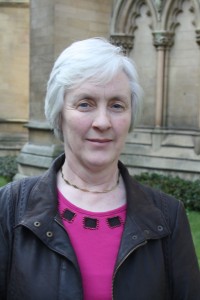 Dr Bernadette Cunningham is a graduate of University College Galway and University College Dublin, and is Deputy Librarian at the Royal Irish Academy in Dublin. She is the author of The world of Geoffrey Keating (Dublin, 2000); The Annals of the Four Masters: Irish history, kingship and society in the early seventeenth century (Dublin, 2010); and Clanricard and Thomond: 1540 –1640: provincial politics and society transformed (Dublin, 2012). She is current editor of Irish History Online, the national online bibliography of writings on Irish history (www.iho.ie). She served as president of the Group for the Study of Irish Historic Settlement, 2010–2013, and chairperson of the Rare Books Group (Library Association of Ireland), 2013–2015. She joined the Council of the RSAI in 2015.