The Royal Society of Antiquaries of Ireland – No 63 Merrion Square: A unique Dublin townhouse complex.

In No 63 there are two large reception rooms (first floor), library (ground floor) and the 100 seat fully equipped Helen Roe Theatre (basement) and a private walled garden which offer a perfect venue for conferences, seminars, meetings, book-launch events, private parties, literature readings and recitals. For further details or to enquire about rental please contact us here.

The Dublin townhouse is one of the most recognisable features of Georgian Dublin. Dating from 1793 Society House is located on Merrion Square – Dublin finest Georgian Square – home to Oscar Wilde, Daniel O’Connell, W. B Yeats and George Russell. 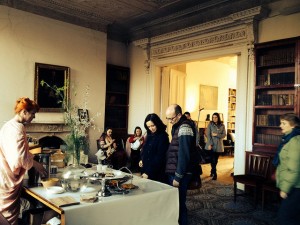 any of its original features including wrought iron balusters and mahogany doors and three magnificent plaster ceilings – the work of Andrew Callnan, influenced by Michael Stapleton, one of Ireland’s most important 18th century stuccodores. 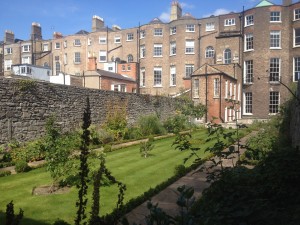 For nearly 220 years the rear garden in No 63 Merrion Square has fulfilled its original role as a private urban pleasure garden. It was never converted to other uses such as a car park or for industrial purposes.

The restored Georgian garden at No 63 retains the layout from the original garden first laid down in 1790. It features an oval shaped path enclosing a lawn, bordered with traditional box hedging, with a number of specimen plants and climbing plants on the walls. Landscaping materials and plants that are consistent with late eighteenth and early nineteenth century gardening practice are used throughout. 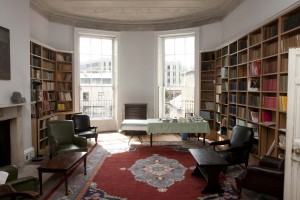 The Royal Society of Antiquaries of Ireland is located at No 63 Merrion Square Dublin – in the heart of the Georgian City – only five minutes walk from Grafton Street.