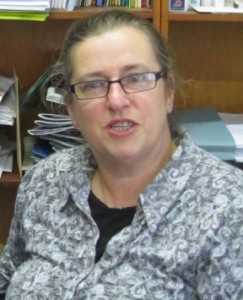 Isabel Bennett is an archaeologist and museum curator who has been living and working on the Dingle Peninsula since 1982, though is originally from Enniscorthy, Co. Wexford. She graduated with a BA and later a Masters degree in Archaeology from UCD, and has more recently been awarded a PG Dip in Museum Practice and Management by the University of Ulster (Coleraine).
Isabel works in Músaem Chorca Dhuibhne, Baile an Fheirtéaraigh on a part-time basis, and is also very involved in the Kerry Archaeological and Historical Society (editing their journal), Dingle Peninsula Tourism, a local marketing group (of which she is currently Chairperson), an Díseart in Dingle, an educational facility on whose board she sits, as well as being a member of various archaeological groups. She has been editor of the annual Excavations bulletin since the late 1980s.
As well as working in the museum, Isabel also worked as a free-lance archaeologist (when there was work!), and is also involved in teaching, and in tour guiding. She lives on a sheep farm in one of the most beautiful areas of the country, Slea Head, and has two adult sons. She joined the Antiquaries when a student, working at Knowth, under the encouragement of Prof. Eogan, and is delighted to be taking a (slightly) more active part in the Society again, something she has not been able to do for many years now, since moving to Kerry and being kept busy with family and work.