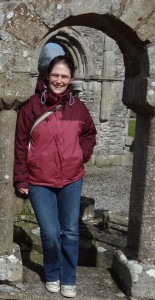 Michael Ann Bevivino completed her Bachelor of Arts in Art History and Archaeology in 2007 at the University of Virginia, Charlottesville, Virginia, USA. She taught at Wellington College in England from 2007 to 2008, and moved to Ireland in 2008. She received a Masters in Classics from University College Dublin in 2010, where her research focussed on modern reproductions of ancient sculpture in Greece and Ireland.

She has worked on various archaeological excavations, including those at Tulsk, Co. Roscommon (2005–2009), The American School of Classical Studies at Athens excavations of the Athenian Agora (2007) and The Petra Garden and Pool Project, Jordan (2011). She has a long-standing affiliation with the Discovery Programme, where she has worked on the Medieval Rural Settlement Project and the Late Iron Age and ‘Roman’ Ireland (LIARI) Project. She was also a Research Assistant for the UCD/Discovery Programme ‘Mapping Death’ project.

In October 2015, Michael Ann was named as an IRC Postgraduate Scholar for her project ‘Breaking the mould: Ireland’s replicas of cultural objects from the historic to the digital’ that runs until 2019.

She has been a member of the RSAI since 2009. In 2013 she joined the RSAI Council and was appointed as Honorary General Secretary in 2015.